After weeks of rain we were blessed with a dry start to the new year for our traditional IWA Lichfield Branch New Year’s Day walk.  The car park was busy as 26 walkers, some who had come from as far as Derby and Malvern, donned their boots for a four-and-a-half-mile ramble to Fradley and back.

Leaving the quiet village of Alrewas we crossed the busy A513 to pick up Daisy Lane.  After a few hundred yards we passed through a metal gate and entered a large field, which is set up permanently for the Alrewas Show that celebrates the local agricultural heritage for one day every July.  Passing through a field of harvested sprouts, we crossed a brook and soon entered the outskirts of Fradley on a bumpy track.  Ignoring a footpath to our left that traversed a field by means of a stile, we eventually turned left and carried on into the village.

Close to Fradley Old Hall we entered an area of common land, known as The Sale.  The unusual name may be Saxon in origin and relate to a salh or sallow tree, or it may be a reference to the major pack horse route for carrying salt which passed between Alrewas and Fradley on route from the mines of Cheshire to London and East Anglia.  The Sale is flat and prone to flooding, nonetheless a number of exploratory trenches in the ground indicate that this land has now been designated for housing.

This was the muddy section of the walk and we made our own ways round the watery deposits.  Eventually we found ourselves back on tarmac and we continued in a northerly direction along Hay End Road to Keeper’s Lock.

After a group photo and a brief detour to use the CRT facilities at Fradley Junction, we joined the towpath that would take us back to Alrewas.  The towpath here is generously wide, which helped us pass a number of oncoming walkers with ease.  A new marina is being built just below Common Lock, and it was pleasant to see a number of boats underway on the Trent & Mersey Canal.  We admired the mural on the side of a house by bridge 48.  The mural depicts a well-known quote by Ratty when “simply messing about in boats”.  We left the towpath just before Alrewas lock and returned to The Crown Inn, where we enjoyed hearty refreshments. 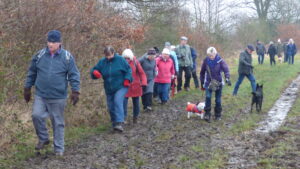 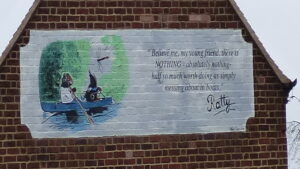