The latest walk organised by the IWA Lichfield Branch was to be longer than usual covering 6½ miles from Milford  and the Staffs & Worcs Canal. Sixteen walkers and a dog assembled in the car park of The Barley Mow in Milford at 09:45 am. This was an earlier start than usual, necessary because of the longer route and a site visit to the Stafford Riverway Link to cover before returning for a pub lunch.

Leaving the car park we headed in the direction of Tixall, crossing first the river Sow on its fine arched bridge and then the Staffordshire & Worcestershire Canal at Tixall Bridge. Half a mile from our starting point we left the Tixall Road to negotiate the first stile on the Two Saints Way, a pilgrimage route and long-distance walk between Chester and Lichfield. The trail connects the shrines of St Chad at Lichfield and St Werburgh at Chester and is 92 miles long. The guidebook encourages you to finish the route in just four days – good luck with that!

Heading in a westerly direction we crossed lush pasture land, much of it saturated following the very wet winter. We watched a hare scamper into Aqueduct Covert and walked through Black Covert and alongside The Swimmings, everything was quiet apart from the noise of the railway on the opposite bank of the river.

As we reached the fenced enclosure of Stafford sewage treatment works, the stiles came thick and fast, some of them were in a very poor state of repair. The Two Saints Way has been diverted round and above the South Staffs Water premises and it is a strange sensation to be looking down on the modern facilities. We played a game of “spot the worker”, there were none to be seen, and this was before the Covid-19 outbreak.

We left the pilgrimage route, appropriately perhaps, at the remains of St. Thomas Priory on the outskirts of Stafford. The priory avoided dissolution in 1536 and several of the buildings have been sympathetically converted into housing. At this point a phone call was made to John Potter, the Work Party Organiser for Stafford Riverway Link, to say we were half an hour away. We arrived at the site on time after crossing the rivers Penk and Sow by means of the Two Waters Way footbridge, built in 2015 to provide modern day pilgrims with a safer route across the valley at the confluence of the rivers Penk and Sow. These rivers flood quite frequently and after a very wet month the meadows here looked more like a lake.

We are grateful for John and his team who explained the layout of the site and their work in uncovering the foundations of the old lockhouse and reconstructing the walls of the former basin, with the long term aim of re-opening the river navigation back into the centre of Stafford. After half an hour on site we turned south-eastwards to follow the Staffordshire & Worcestershire Canal back towards our starting point along a pleasant section of towpath and under a succession of original Brindley bridges built in 1772.

Hungry for food, and with an increasing chill in the air, the group had by now spread out along the towpath and some walkers missed the exit point at Walton Bridge, where the official route headed towards Berkswich before returning to the Barley Mow via the A513. The breakaway group found their own way back, and by good fortune both groups arrived back at the pub within five minutes of each other. We then retired to the newly refurbished pub for refreshment. 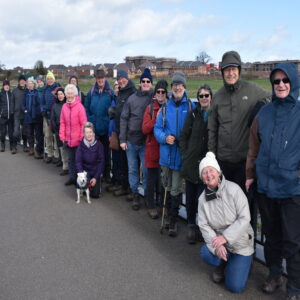 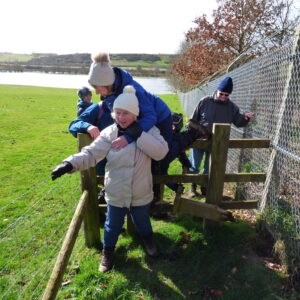 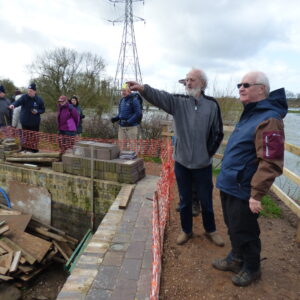