Moorhens are also called marsh hens or river chickens. They are small black feathered birds with a red pointed beak and are found near marshes, ponds and streams. Moorhens can live in cities as well as the countryside. To help them with swimming and walking on slippery surfaces they have webbed toes. A moorhen’s diet consists of insects, water-spiders, plants and larger animals such as lizards.

Male Mandarin ducks have a red bill with orange feathers on their cheeks and sides and a purple breast with two white vertical bars. Female Mandarin ducks are different in how they look to male ducks they have grey heads with a white stripe behind the eye and a brown back. These ducks are shy and like to be beside lakes with overhanging trees and bushes. Mandarin ducks eat insects, vegetation and seeds.

Photo of a Male Mandarin Duck by David Iliff 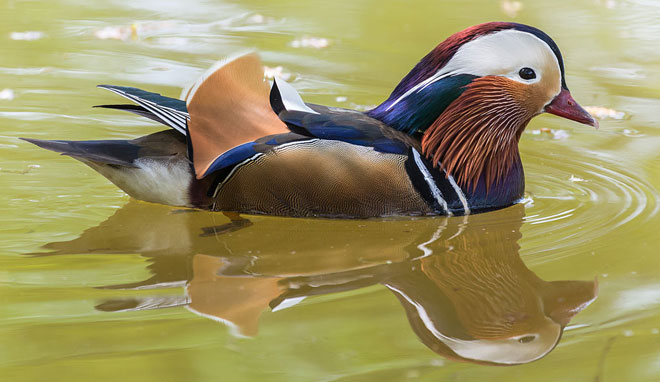 Kingfishers have large heads, a long sharp bill, short legs and a short tail. They have brightly coloured feathers with some kingfishers having feathers sticking upwards from their heads. Their nests are in tree hollows or holes in the ground beside a river bank or lake. Kingfishers are known for hunting and eating fish but some kingfishers also eat crustaceans, frogs, insects, spiders, reptiles and mammals. Even though these birds have bright colourful feathers it is rear to spot one along the waterways!

Photo of a Kingfisher by Thoth,God of Knowledge (Flickr name)

Mallards are large, sociable ducks that live in rural or urban wetland habitats. Male birds have a green head and grey on their wings and belly and female birds have brown specks on their feathers. Mallards eat water plants, seeds, acorns, berries and insects. At this time of year there is likely to be lots of ducklings about!

Photo of Mallard Ducks next to PaperMill Lock, Chelmer and Blackwater Navigation 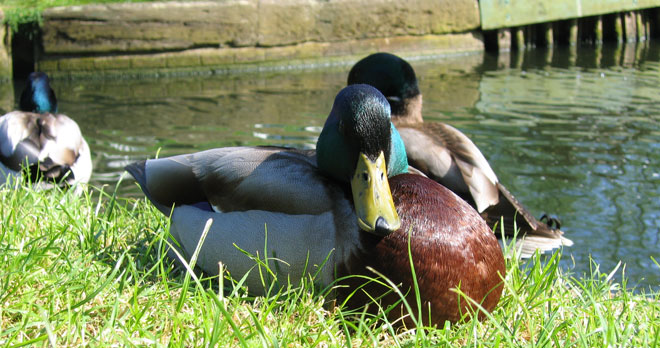 Reed Bunting birds have large heads and thick necks and are medium in size. Male birds have a black head and white collar and when singing they are usually perched on a bush or reed. Their habitats are in dense vegetation and the nests are built by female birds with reeds and grass. These birds are found in wet vegetation and on farmland. They like to feed on seeds and insects.

Photo of a Female Reed Bunting Bird by Thermos

The Mute Swan is a very large, white heavy flying bird. They have long S-shaped necks and orange bills with black at the base. Mute swans can be seen anywhere where there is a shallow lake or river even in urban parks. Swans eat seaweed and aquatic plants whilst on the water or seeds, berries, insects and plants when they are on land.

Photo of a Swan Family by Chris Clegg 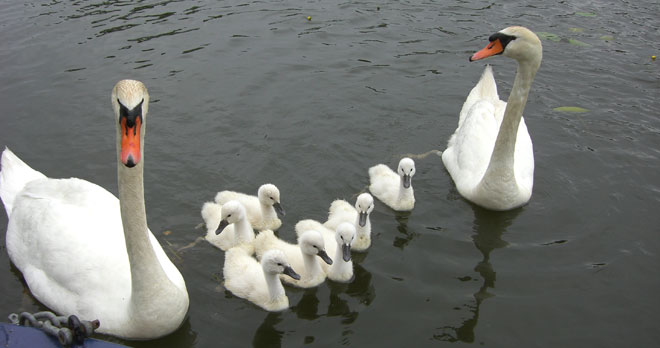 Grey herons are long-legged birds that primarily feed on fish.  They are non-swimming birds and can be seen by lakes, rivers, swamps, ponds and the sea. Herons hunt on their prey by sitting still on the edge of the water before using their long beaks to catch food from the water or the ground. The diet includes a range of aquatic animals, including fish, reptiles, amphibians, crustaceans, molluscs and aquatic insects.

Photo of a Grey Heron by Angela Acott

Coots have black feathers with white bills and white on top of their bills. These birds can be seen on freshwater lakes, gravel pits, reservoirs, rivers and urban park lakes. They build their nests in shallow water sheltered by vegetation and sometimes out in the open. Coots like to feed on aquatic plants and small animals such as snails and larvae.

Photo of a Coot by Marcus Rowland 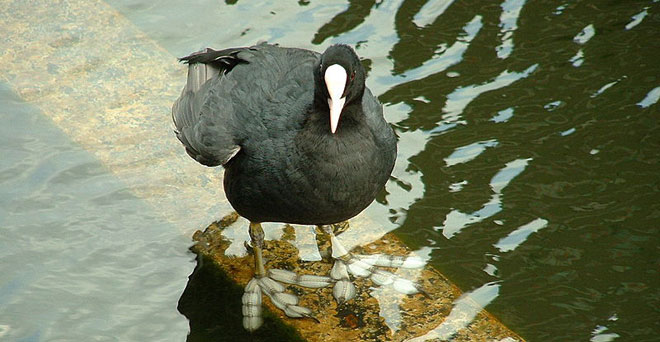 Geese are large, noisy birds and can be seen in grassland areas and parks with lakes. Their diet consists of grass, roots, cereal leaves and spilled grain. The Canada goose has a large population in the UK. They have a black head and neck with white patches around the throat.

Photo of a Canada Goose

Great Crested Grebes are small birds with pointed bills, round bodies and small tails. They can be seen at lakes, gravel pits, canals and slow moving rivers where there is lots of vegetation. They are excellent swimmers and divers but cannot walk on dry land. Their habitats are floating nests built near vegetation in the water. Great Crested Grebes eat insects, crustaceans and small fish.

Find out more about wildlife by the waterways.

Find out about the navigable canals and rivers near you – as well as waterways events, activities and groups.

All Party Parliamentary Group for the Waterways: Freight and sustainability

5 ways to make your boating greener

10 insects to look out for around the waterways

IWA’s West Riding Branch heritage champions have saved this lock cottage near Halifax on the Calder and Hebble, at the…

Ashton Attack (ASHTAC for short) followed on from Operation Ashton, the campaign to save the Ashton Canal. Approximately 1000 people…