Sitting in my narrowboat, in the middle of January, with the rain pounding on the roof and the swollen waters of the River Great Ouse rushing past, last summer’s water shortages are only a distant memory. This may seem an odd time to be thinking about water resource management, but it isn’t.

There are two parts to water resource management: getting rid of excess water (flood management), and guaranteeing a sufficient year-round supply of clean water to meet demand. For many years these activities have both taken place but perhaps despite, rather than in accord with, the other.

Here in the Eastern Region, those of us who boat on the rivers Nene or Great Ouse know how quickly the water rises after what appears to be quite a modest amount of rain. Much of the surrounding ground is clay, and rain runs straight off it and into the rivers.

Last year, during two heavy rainfall events the Environment Agency disposed of a total of 100 million cubic metres of water (approaching twice the volume of water in the Manchester Ship Canal) by pumping out to the Wash. This was at a time when the underlying water levels in the region remained very low.

Shortage of water for navigation affected the Grand Union Canal between Braunston and Stoke Bruerne during the summer of 2019, and locks were closed overnight. I remember the  frustration of waiting in steady drizzle for Canal & River Trust to reopen the Buckby Flight one morning. There was a certain irony that the locks were shut to save water despite the seemingly abundant quantities descending on me from above.

What is clearly needed is an approach to water management which balances and reconciles the two apparently contradictory requirements of getting rid of water, and of finding it.

To tackle this problem across the country, five regional planning groups working as part of EA’s national framework have been set up. Water Resources East has been instructed to take a holistic approach for the Eastern Region.

WRE (which covers 31,000km² from the Humber in the north to Basildon in the south, and Northampton in the west to the East Anglian coast) is predicted to face a gap between supply and demand of 750 mega litres per day if it carries on managing water resources in the same way as before. This is the equivalent of 40 Olympic-sized swimming pools-full daily. WRE is focused on recognising the impact that climate change and population growth will continue to have on Eastern England’s finite water supply, combined with the need to enhance the environment in this region.

The Eastern Region is home to some of the UK’s most exciting businesses, beautiful natural sites, fertile agricultural land and prestigious academic institutions. Three of the UK’s five fastest-growing cities, the Thames Gateway, and the M11, A11 and M1 growth corridors are all in the Eastern Region – making a significant contribution to growth nationally.

However, the East of England has other characteristics that make it uniquely vulnerable to water shortage and severe weather events. Part of the land mass is below sea level and a huge proportion of the area is used for agricultural production; due to relatively low rainfall it’s also the driest region in the UK despite it having one of the longest coastlines of any region. With the increasing risk of drought and a likely surge in demand for food, energy and services, there is a real risk that a lack of water could limit growth and development in the area. 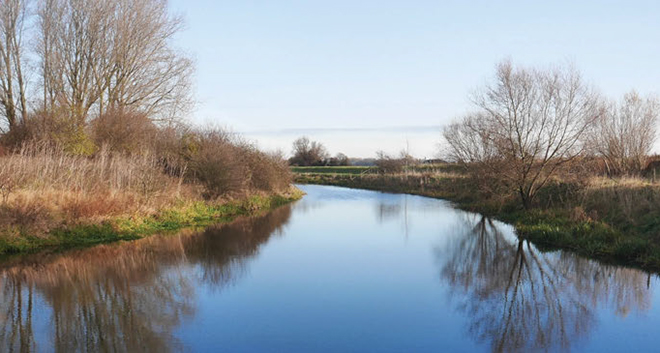 WRE’s immediate task is to guarantee an adequate water supply for East Anglia. The River Trent provides a supply of water in excess of the requirements of the areas along its banks, and the plan is to move water from the Trent down to a new reservoir to be constructed somewhere broadly in the region of Holbeach. Most of this can be done through existing waterways, but extra connections are required.

The water companies have traditionally moved water in closed pipes, rather than by open channel. However, in the 1960s the Great Ouse Cut Off Channel partly included open water transfer. The eastern (Denver) end of the cut off channel acts as a wildlife corridor, but is sadly closed to leisure activities, including boating. The southern part of the channel disappears into a tunnel and only serves to deliver drinking water to Essex. IWA argues that moving water from the River Trent to this new reservoir using existing rivers and dykes should produce as wide a range of benefits as possible. EA and Lincolnshire County Council support this argument.

Many people enjoy spending time on or near the water, and the Government is actively promoting the benefits of walking, cycling, nature preservation, fishing, canoeing, paddleboarding etc. What we’ve all known for years is now official – boating is good for your health!

If the proposed water transfer link to the River Trent is made navigable it brings the aspirations of the Fens Waterways Link significantly closer. With EA and LCC, IWA has formed the Boston to Peterborough Wetland Corridor to ensure that the connection be open water. Even Defra is in favour.

The partnership has commissioned a Business Case Study to identify and quantify the many benefits (including economic and wellbeing) of bringing surplus water into the region by open channel. This is a very real project with a concise timeline. Reservoir concept design should be completed by the end of March 2021. The project should be ‘shovel ready’ by 2025 and completed by 2030.

This neatly dovetails with the aspirations of the Boston to Peterborough Wetland Corridor. Completion of the proposed reservoir should facilitate an open-water channel as far south down the River Welland as Peakirk, which is a couple of miles north of Peterborough. To connect to the River Nene below Peterborough will require approximately 12 miles of new waterway. There are two potential routes, either along the Car Dyke or the Cats Water Drain. Both of these pass through flat, agricultural land and wouldn’t pose significant engineering challenges.

The River Trent provides a year-round supply of surplus water; however, WRE is not the only area to be ‘eyeing it up’ as a source. During times of high rainfall so much water outflows down the River Nene that EA reverses the locks – opening the top and bottom lock gates at the same time to increase flow. If only some of this extra water could be stored and recycled for use during dry months. Hopefully one day the potential of doing this will encourage the development of the remaining ‘missing link’ between Peakirk and the River Nene.

Boston and Peterborough are geographically only 30 miles apart, but at present navigating between them by boat requires either a challenging Wash crossing or a torturous 250-mile, 135lock, 15-day trip, restricted to boats less than 7ft wide. When the Boston to Peterborough Wetland Corridor comes to fruition, it will only require a couple of days’ leisurely cruising.

Read about the Boston to Peterborough Wetland Corridor campaign.

Sitting in my narrowboat, in the middle of January, with the rain pounding on the roof and the swollen waters…