Crete has early examples of simple water channelling systems from the Minoan period, and Egypt & China both had their quanats to carry water underground. The first long-distance canal systems were constructed by the Assyrians in the 9th century BC. In the 7th century BC Assyrian king Sennacherib constructed a wide canal with a 920ft (280m) long white stone ‘bridge’ to bring water to Nineveh, the Jerwan aqueduct, acknowledged as the first large above-ground aqueduct.

The Greeks then got in on the act, with Athens amongst other locations being supplied by long distance aqueduct systems in the 6th century BC.

When in Rome, what did the Romans do?

Some Roman aqueducts are still in use in Rome today! They provided drinking water to inhabitants – a million of them at its peak – up to 1 cubic metre (1 tonne) each every day. This is about five times what we in the UK use on average today. The Roman aqueducts not only provided drinking water for the Romans but also supplied the bath houses with ample water, and others acted as indoor sewer systems that carried water away from the city.

The water flowed and emptied by gravity into giant cisterns in the city, which then distributed the water through lead pipes to most parts.

The invading Goths and Visigoths – all barbarians to the Romans – knew the importance of the water supplies to Rome, and systematically destroyed them as they invaded. The structures were not put back into use until the Renaissance period.

But what about canal aqueducts in Britain?

Completed in 1761 and opened on 17th July to cross the River Irwell, this was the first canal aqueduct in Britain. The stone aqueduct was about 600’ in length and 36’ in width at the top, the waterway being 18ft (5m) wide and about 4 1/2ft (1m) deep carried in a puddle channel across the structure. James Brindley is said to have ‘retired to his bed for several days’ when the Barton aqueduct was opened, as it sagged a bit, however it was still in good condition when replaced in 1893 by the Barton Swing Aqueduct, designed by Sir Edward Leader Williams when constructing the Manchester Ship Canal, itself still going strong today.

The aqueduct was high and finely built, to leave space for the Mersey and Irwell Navigation boats to pass. Perhaps as a result of the sagging, Brindley’s aqueducts from then on were very squat and massively constructed, as can be seen in his longest remaining one carrying the Trent and Mersey Canal over the River Dove, north of Burton on Trent with its 23 arches.

Gunpowder, but not necessarily treason and plot…

The Royal Gunpowder Mills in Waltham Abbey had their own canal system. It began with the Millhead Stream, which was used as a canal for the smooth and safe delivery of raw materials and collection of gunpowder. This finally extended to a system over 5 miles long linking all the buildings involved in making gunpowder.

The cast iron aqueduct was one of two aqueducts built in 1878-9 to carry the extended high level canal system over the natural waters of the original River Lea. Both these aqueducts are made from three huge cast iron plates (the base and two sides) brought by barge and then lifted and riveted on site. There is a third aqueduct near Newton’s Pool of a slightly different design. There are only 26 cast iron aqueducts in Britain. Three of these are in the Gunpowder Mills.

The Shrewsbury Canal was originally constructed with Josiah Clowes as Chief Engineer, however he died in 1795 part way through construction. Thomas Telford, who was at the time Shropshire’s County Surveyor and already engaged on the Ellesmere Canal, took over.

One of Telford’s first tasks was to rebuild a stone aqueduct over the River Tern at Longdon-on-Tern which had been built by Clowes but swept away by floods in February 1795. Telford originally intended to replace like for like, however it is suggested that the influence of Shropshire Ironmasters such as William Reynolds in the Shrewsbury Canal Company, led Telford to jointly design the simple cast iron trough with Reynolds. The design used cast iron trough sections from Reynolds’ Ketley ironworks  bolted together on site in 1796. The main trough was 62 yards long (57m), 7.5ft (2.3m) wide and 4.5ft (1.4m) deep, with a half height narrower trough to one side which formed the towpath.

The aqueduct was the world’s first large-scale iron navigable aqueduct, though it was narrowly beaten by a much smaller 44ft long (13m) structure on the Derby Canal built by Benjamin Outram.  The Derby Canal aqueduct itself was removed from site for safe keeping when the canal was filled in by Derby City Council, however the ironwork went missing possibly scrapped during a clearout. Never throw anything away!

How do you weed an aqueduct?

Very carefully is the answer here. Amongst the 42 aqueducts, four tunnels and 430 bridges North Wales and Borders Canal & River Trust weeded last winter some were a few bit bigger than average – Chirk on the Llangollen Canal and Vyrnwy on the Montgomery Canal, with Pontcysyllte the biggest.

The three specialist abseilers (IRATA level 3 for those who know…) seemed perfectly at ease dangling from the structure, during the single day the work took.  The vegetation was mainly of ivy growth on the piers and small saplings that had grown out of the base of some of the middle piers. Now the greenery is out of the way the structure can be inspected in detail, and remedial works scheduled for next year. BBC, ITV Wales and the local paper all came to see and record progress.

And the cost? Well, the abseiling was around £2,000 for the day – I think I’d have needed a lot more than that to go out over the edge, especially to pull out weeds.

The structure, designed and built by Telford overseen by Jessop is 1,007ft long and carries what we now call the Llangollen Canal (originally the Ellesmere Canal) over the valley of the River Dee. It is constructed of local stone with a cast iron trough 11ft 10in (3.6m) wide and 5ft 3in (1.6m) deep which extends under the towpath.  The aqueduct holds 1.5 million litres of water and takes two hours to drain, and holds the title of the ‘largest aqueduct in Britain’. The pillars were constructed to a hollow and tapered design, to reduce the overall weight of the structure and size of the pier foundations.  Mortar used was mixed from ox blood, lime and water and the sealant for joining the cast iron aqueduct plates from Welsh flannel and a mixture of white lead and swarf from boring waste. Begun in 1795 it was completed in 1805 and cost a total of £47,018 6 shillings and 7 pence. ‘Pontcysyllte’  means  “Cysyllte Bridge”. 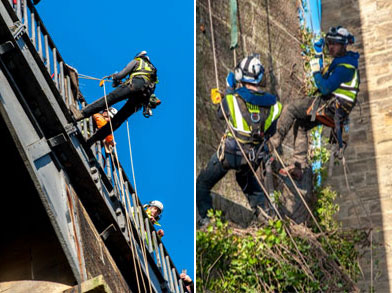 Stratford Canal’s Edstone Aqueduct – Just the thing if you run out of steam!

The 475ft (145m) Edstone Aqueduct is the longest aqueduct in England. It takes the Stratford Canal over the tracks of the former Alcester Railway line, and locomotive firemen would often top up their boilers via a convenient pipe feeding down from the aqueduct!

Rennie’s Dundas Aqueduct carries the Kennet & Avon Canal over the River Avon and the Wessex Main Line railway from Bath to Westbury, near Limpley Stoke in Wiltshire, England. It is named after Charles Dundas, the first chairman of the Kennet and Avon Canal Company.

Closed in 1954, for a while in the 1960s and 1970s the canal was dry and it was possible to walk along the bed on each side of the river as well as through the aqueduct itself. The aqueduct was relined, with polythene and concrete and restored, reopening in 1984.

It is a Grade I Listed Building, and was the first canal structure to be designated as a Scheduled Ancient Monument in 1951.

And finally… the most elaborate aqueduct?

The aqueduct carrying the Engine Arm over the Birmingham Main Line was one of the later cast iron examples, a single span cast at Horsley Iron Works ornately decorated with a gothic ‘blind arcade’- a series of pillars linked by arches. Painted as it is today, this looks very impressive.

Come to your Census – advice for boaters

Ten Good Reasons to go on a Boating Holiday

Red diesel budget announcement is a win for boaters

Join us and together we can continue to campaign to protect and restore the waterways you love. Become a member for as little as £36 per year – or you can choose to give more.

Five Canal Camps, organised by our Waterway Recovery Group, are taking place in July and August.

IWA facilitated the online meeting, with presentations from the Residential Boat Owners Association, the National Bargee Travellers Association and Canal…

New research reveals a total of 7,000 miles of waterways in Great Britain. Of these, 5,000 of the miles are navigable today. The other 2,000 miles are…

Covid-19 and using the inland waterways

We have been engaging with DEFRA on how the proposed steps of the Government’s roadmap, announced in February, should be…